The Geographical Eden in Southern Iraq

The Garden of Eden is one of the most well known allegories in Western Christendom. While most would consider Eden to be primarily an Abrahamic myth, there is a reasonable amount of evidence to suggest that it has a historical basis. Notably, Genesis actually gives a detailed description of it from a geographical perspective:

And a river went out of Eden to water the garden; and from thence it was parted, and became into four heads. The name of the first is Pison: that is it which compasseth the whole land of Havilah, where there is gold; And the gold of that land is good: there is bdellium and the onyx stone. And the name of the second river is Gihon: the same is it that compasseth the whole land of Ethiopia. And the name of the third river is Hiddekel [Tigris]: that is it which goeth toward the east of Assyria. And the fourth river is Euphrates

While two of those rivers do not correspond to any known modern waterways, they actually refer to two historical rivers, namely the Kuwait (Pishon) and Karun (Gihon) rivers which merged with the Tigris and Euphrates at the Satt al Arab waterway in Southern Iraq. The map below gives a general layout of the four rivers as they existed historically.

As it follows, the juncture of these four rivers in Lower Mesopotamia is what can be assumed to be the geographical location of Eden, at least according to the Genesis description. It is also worth noting that the previous boundaries of the Persian/Arabian Gulf placed it further north than it is now, as shown on the map below. 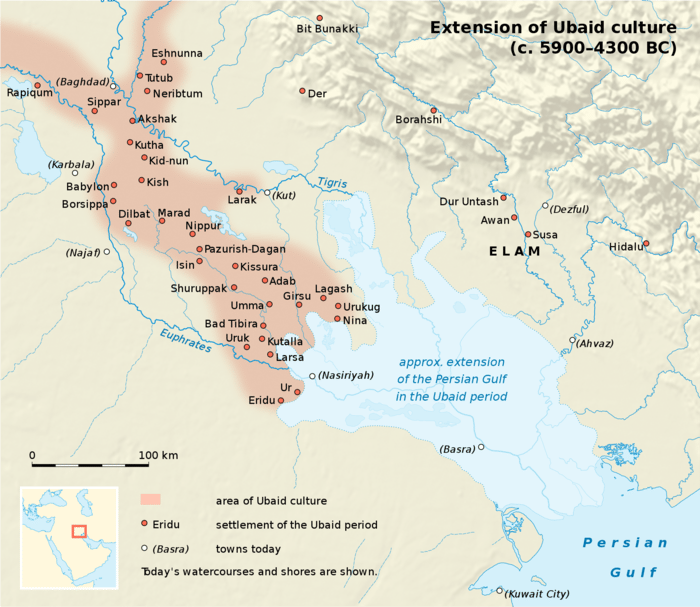 The ancient pre-Deluge city of Eridu, often considered to be the oldest city in the world, was a coastal city, despite the fact that its ruins are deep in the Iraqi desert today. Gradually, through the process of climate change and drying of the Arabian peninsula, the coastline moved further south to where it is today. 7000 years ago, at the dawn of the first urban settlements, Southern Mesopotamia was a lush region vaguely resembling the remaining Iraqi marshes of the deep south. The marshes have since mostly disappeared, but some photos taken a number of years back are shown below. 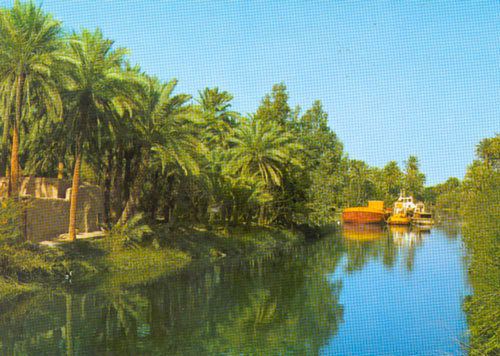 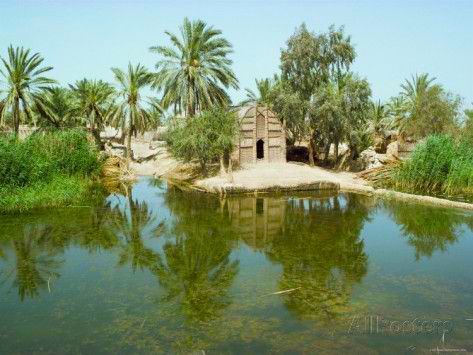 Further evidence supporting the Eden-in-mesopotamia hypothesis has to do with the Ancient Sumerians themselves. The word ‘Eden’ is borrowed from the Akkadian ‘edinu’, which is itself borrowed from the Sumerian ‘Edin’ meaning ‘plain’ [1]. One of the early mentions of this word is from a stone cylinder found near the ancient city of Girsu. An inscription on it reads:

Clay plaster, harmoniously blended clay taken from the Edin canal, has been chosen by Lord Ningirsu with his holy heart, and was painted by Gudea with the splendors of heaven, as if kohl were being poured all over it [2].

The Edin canal most likely refers to an ancient waterway located in what is now southern Iraq, which has in its river bed the distinctive purplish sand that is still found in this region of Iraq. Furthermore, the history of Middle Eastern climate suggests that the beginning of the pre-historic Ubaid period coincided with an increase in precipitation around Southern Mesopotamia which resulted in the formation of many lush gardens and lakes. Interestingly, the Ubaid period also produced the first urban settlements, chiefly among them Eridu. Gradually the population in the area increased and transitioned from a hunter-gatherer culture to a sedentary agricultural one.

Sumerian mythology describes a strikingly similar region on a number of occasions. Similar to Genesis 2:12, The Epic of Gilgamesh describes an Earthly garden of heaven. In the myth, paradise is identified as the place where the deified Sumerian hero of the flood, Utnapishtim, was taken by the gods to live forever.

There was a garden of the gods: all round him stood bushes bearing gems … fruit of carnelian with the vine hanging from it, beautiful to look at; lapis lazuli leaves hung thick with fruit, sweet to see … rare stones, agate and pearls from out the sea [3].

Some suspicions have been raised that this once again refers to the Abzu (the great fresh sea) surrounding the ancient city of Eridu in Southern Mesopotamia. In the Sumerian ‘Incantation of Erudu’, there is a description of a “glorious fountain of the abyss”, a “house of wisdom”, sacred grove and a kiskanu-tree with the appearance of lapis-lazuli [4]. Perhaps strikingly of all, the allegory of the ‘Fall’ has a Sumerian equivalent or origin as well. Sumerian mythology describes how the goddess Inanna delivered the ‘mes’, or ‘gifts of civilization’, to the ancient city of Uruk after the fall of Eridu. The mes in Sumerian mythology provide a connection between the heavenly gods and the human world through features such as technology, kingship, society, and the arts of love and music. However the gifts also carry with them an eternal curse of civilization, namely ‘enmity’, ‘destruction’, and ‘falsehood’ [5]. The Sumerians apparently considered such evils and sins an inevitable part of humanity’s experience in life, divinely and inscrutably decreed, and not to be questioned. [6]

Historically, the early Ubaid settlements such as Eridu began to decline around the middle of the fourth millennium BC, partially due to environmental damage caused as a result of overpopulation and soil degradation. Later Sumerian authors of the literate period would look on this period much in the same vein as the ‘Fall’ in Genesis. The destiny of mankind was the grasping of the sacred knowledge, only to destroy itself with that same knowledge. For the Christians it was the apple, for the Mesopotamians it was the first recorded example of environmental destruction. In many respects, it is this transition from a hunter-gatherer culture of the Eden-like early Ubaid period to the larger settlements that followed, that may provide the historical basis for the Arcadian myths of the Bible.

If you were to assemble a tea with the great Classical poets and philosophers from the ancient world, you would certainly leave a chair open for Cicero, for Homer, for Virgil, Sophocles, Plato, and Livy. Leaving an entire row empty for... Continue →