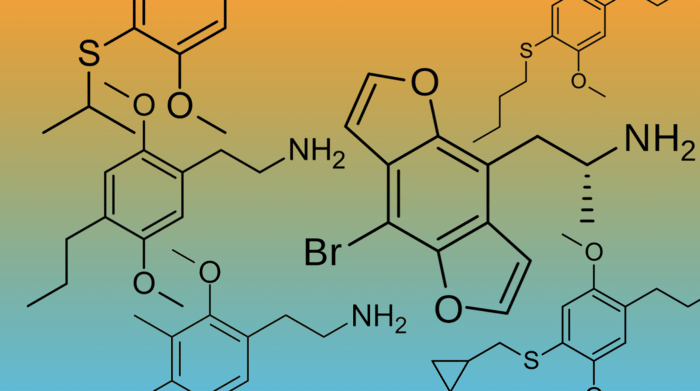 In the course of a burgeoning interest in psychedelic medicine, one comes across two broad categories of similarly interested characters. You will find that some are neurotically obsessed with rigor and refuse to even discuss what these things do on a subjective level while others will insist you sit down and listen to their story of aligning a colleague’s moon chakra using an herbal intoxicant. While the two sides seem to disagree on pretty much everything, there does seem to be a common distaste for anything that’s not a ‘typical’ psychedelic like psilocybin or ayahuasca. Wait, no, you can’t move that hydroxy group from the 4 to the 5 position! Once the conversation drifts in that direction, they seem to conjure up images of underground drug labs in Ohio run by people named ‘toad pRofit$’ being raided by the DEA. On a cultural level, we’ve decided that if a therapy is run with a shaman using a completely chemically-uninterpretable drug cocktail: totally a-okay. But if it’s run with a synthetic pure compound of known quantity: immediate banishment. It’s silly of course in the sense that in either case there are centrally active compounds with particular affinities and whether yours comes from a three step synthesis or from a plant is really irrelevant to your brain’s serotonin receptors.

That said, I thought it might be fun to talk about the compounds that didn’t quite make it into PIHKAL, or which made it in with a substantial disclaimer. As in, phenethylamines that are both centrally active and unlikely to make it into a clinical trial anytime soon. There are a few genuine reasons for discussing negative valence compounds and they have nothing to do with filling up space. Firstly, getting a better grasp on what doesn’t work and why may give us some clues on how to design better compounds. Given how concentrated the activity seems to be at a few critical ring positions and what a wide variance of effects is hence generated, this may give us some design clues from a therapeutics perspective.

Secondly, phenethylamines in particular are a source of endless fascination because of the interplay of the amphetamine-like TAAR1/D1-agonist effects and the tryptamine-like 5-HT2A-agonist effects. This can be both beneficial, reducing the potential for negative valence during a clinical infusion and also a recipe for disaster if the pharmacodynamics and dosage of the compound are less-than-ideal.

It is also the case that due to these non-specific effects, phenethylamines seem to have a generally less ideal safety profile compared to lysergamides or tryptamines. One notorious nasty side effect is vasoconstriction. Another is serotonin syndrome when the compound has both serotonin transporter activity and is a MAOI. Occasional deaths have been attributed to compounds of this class, though the culprits mostly seem to be general mishandling, inaccurate dosing, mislabeling, or haphazard co-administration. Nevertheless, these and other reasons make me suspect that even ‘safer’ phenethylamines like 2C-B won’t be getting FDA approval anytime soon. 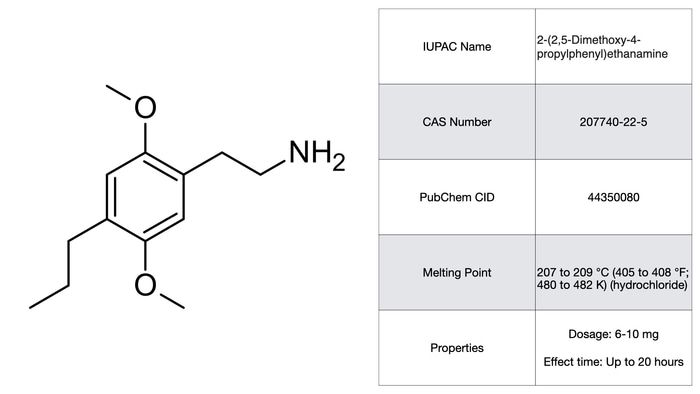 2C-P combines the traditional di-methoxylated phenethylamine with a propyl-substitution at the 4 position. The 4 position is the critical R-group for 2C compounds, sort of akin to the 4 and 5 on the indole benzene ring for tryptamines. Substitutions at the 4 tend to change the subjective effects and duration of the drug considerably. With the case of 2C-P it produces a compound with very high potency (6-10 mg dosage range) and quite long periods of activity, up to 20 hours. Yes, 20 hours! Not to mention that peak effects don’t take place for 3-5 hours after oral consumption. The subjective effects themselves tend to vary in terms of valence with some reports of notable physical discomfort. As a potential treatment though, the long activity time and onset time is unlikely to work in its favor. 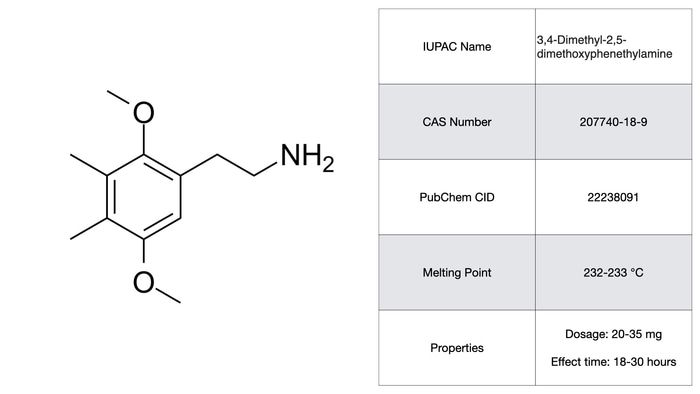 2C-G is another phenethylamine with a somewhat lower potency than 2C-P balanced by an even longer effect time (18-30 hrs!). I was considering not including this on the list primarily because the subjective effects are largely subdued, having no strong visual or tactile components. 2C-G is classified as more of a ‘insight enhancer’ by Shulgin and is probably best suited for a role in psychotherapy. The extremely long effect time seems to cast doubt over that possibility. As with the other phenethylamines, the toxicity and pharmacology of 2C-G is poorly worked out or non-existent altogether. 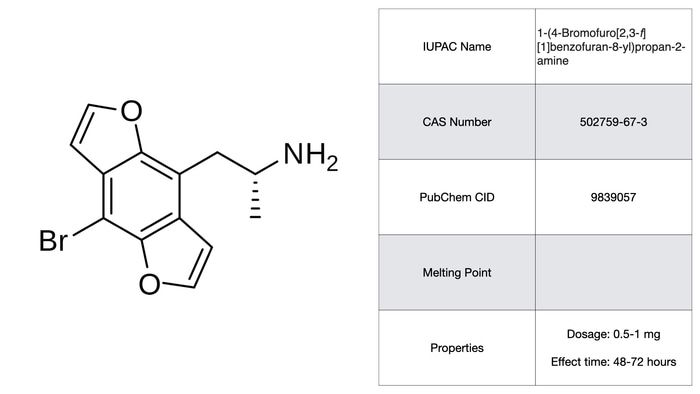 Somewhere near the top of the list of unfortunate creations to come out of David Nichols’s lab is this monstrosity with two furans fused onto a 2C-B structural variant. Firstly the pharmacology of Bromo-DragonFLY tells us that it is a non-subtype specific 5-HT2 agonist. It’s also a MAO-A inhibitor, which strongly inhibits oxidative deamination of 5-HT, thereby increasing its overall nastiness. Due to being confused for the related, but far less potent 2C-B-FLY, there has been an unfortunate string of overdoses. At higher, non-therapeutic doses, reports indicate vasoconstriction so extreme that it causes tissue necrosis, seizures, and near fatal asphyxia. More-over subjective effects have been described as “like being dragged to hell and back again. Many times. It is the most evil [thing] I’ve ever tried. It lasted an eternity.” Oh and it lasts up to 3 days. No gracias. 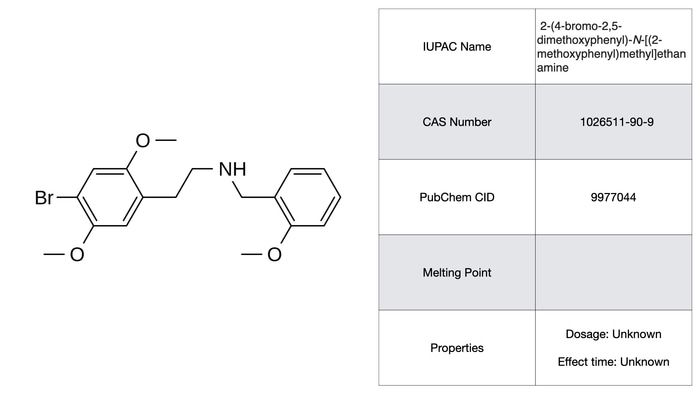 25-NBOMe is a relatively unknown derivative of 2C-B created at the Free University of Berlin in 2004. Anecdotal reports suggest that an active dose is something in the range of 250-500 µg with a 12 to 16 hour duration time. The compound is also structurally analogous to 25I-NBOMe and probably shares much of its risk profile. The high potency makes it a high risk for overdosing if taken nasally. High doses have also been linked to thrombosis and vasoconstriction similarly to Br-DragonFLY. On the side of subjective effects, things are not helped by the wide range of experiences ranging from changes in tactile perception to paranoia and ego death. Certainly the narrow range between a safe and lethal dose is quite debilitating for any medical use. 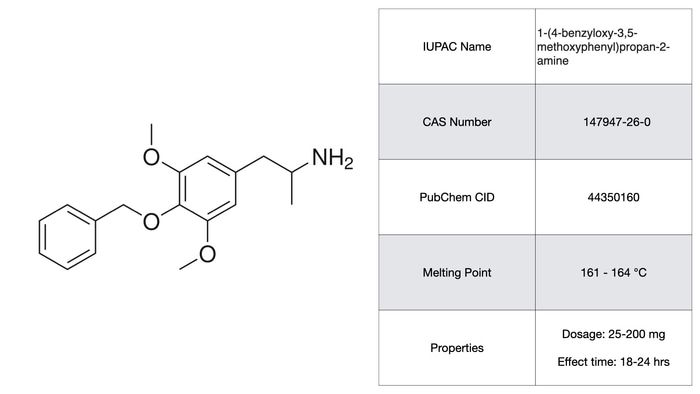 This is another Shulgin substituted amphetamine with some bizarrely differing effects. The activity time is quite long, up to 24 hours, and the dosage of activity seems quite wide. Based on the few reports available, the lower dosages below 50 mg seem to induce a wakeful, emotionally vulnerable, and not-always-positive place, along with the amphetamine-like kick. At higher doses, the reports seem to suggest an almost LSD-like experience. Most of the subjects described being physically exhausted after the experience, which seems to subjectively drag on forever. What is notable and can be learned from is the drug’s tendency to produce differing amphetamine-like effects at low dosages and tryptamine-like OEVs at higher levels. Certainly elucidating the pharmacodynamics would cast some light on this observation. 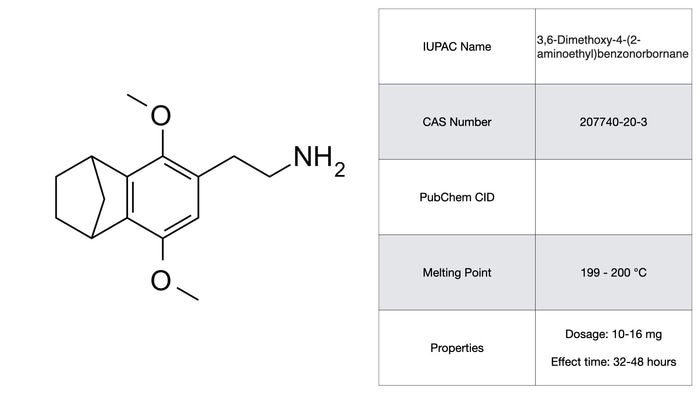 2C-G5 is technically a derivative of 2C-G and is often classed as such, though it has a distinctive benzonorbornane ring system at the critical 4 position on the phenethylamine. Such chemical stapling is bound to produce some unique effects. In this case, it produces a compound with an active period of 48 hours. Though the effects are somewhat subdued compared to other compounds of this class, it’s probably the longest acting phenethylamine to be included in PIHKAL. Furthermore, as Shulgin notes himself, it’s a racemate due to the benzonorbornane chiral center. Separation of the optical isomers might provide some insight into the binding of these compounds at their receptors, though the process of separation is a time consuming one.

A number of other synthetic phenethylamines synthesized by both Shulgin and others present similar challenges. Notably, 2C-T-4, 2C-T-8, and 2C-T-9 have some unfortunate properties including long periods of duration and nausea, as well as a bunch of negative valence subjective effects. The hope in cataloguing drugs with unfavorable properties is to begin a process of understanding the experiences better and hopefully to build better ones in the future. As stated before, phenethylamines despite all of their downsides are an endless source of fascination due to the wide range of effects and effect times in humans.

This week’s post will be a shorter one than usual but I wanted to do another medium-intensity dive into the mysterious ‘third’ or ‘fourth’ family of hallucinogenic substances, depending on your taxonomic preference. Like I mentioned in a... Continue →