The neurobiological activity of hallucinogenic tryptamines

the full preprint containing a tryptamine index is available at https://www.dropbox.com/s/orchzuivtsoos1y/Tryptamines%20of%20Interest.pdf?dl=0

Tryptamine-derived compounds, many of them hallucinogenic, have been found to be potent pharmaceutical agents1. In particular, psilocin (4-HO-DMT) and 5-methoxy-dimethyltryptamine (5-MeO-DMT) have performed exceptionally well in controlled studies across a variety of conditions, including depression, anxiety disorders, post-traumatic stress disorder, and substance addiction, even after a single treatment.2,3 Mostly naturally occurring species have been investigated although many synthetic alternatives have the potential to offer preferable qualities including higher potency and improved valence, making them safer and more effective in the clinical setting.4,5 In this review, I describe our current knowledge of molecular and receptor circuitry involved in the hallucinogenic action of tryptamines as well as some challenges and prospects in ensuring physical and psychological safety of hallucinogenic tryptamines in the clinical setting.

Despite a large volume of research into the psychiatric applications of tryptamine and phenethylamine-derived compounds, an unfavorable political climate and broad fear over misuse in the late 1960s shut down a significant portion of further studies and academic work, despite highly promising results.6 Simultaneously, the discovery rate for new neuropharmacological small molecule agents has been exceptionally slow with few notable successes.7 As an example to illustrate this point, current rates of efficacy for the most effective antidepressant selective serotonin reuptake inhibitors (SSRIs) average below 50 percent with a significant number of drawbacks including dependency and serious side effects.8,9

Nevertheless, the last two decades have witnessed the revisiting of previously neglected compounds which have shown to be effective in treating a wide range of neuropsychiatric disorders. In particular, tetrahydrocannabinol (THC) has been used for the treatment of epilepsy, Dravet syndrome, and for the prevention of nausea caused by certain cancer medications, amongst other conditions.10 Esketamine, a glutamate receptor antagonist and enantiomer of ketamine, was found to treat depressive symptoms in patients and subsequently approved for use by the United States FDA.11

Presently, serotonologic compounds such as psilocin, DMT, and 5-methoxy-DMT have been resurrected as potential treatments for depression, anxiety, post-traumatic stress disorder, substance abuse, and personality disorders. While many of the initial results have been highly promising, challenges remain including physiological and psychological safety. While many of the compounds tested have a number of highly beneficial properties including generally low substance abuse profiles, they can also induce negative symptoms such as paranoia and cause fearful episodes.12

As the new wave of serotonological therapeutics begins to mature, it is possible structural derivatives of existing hallucinogenic compounds will play a role in improving safety, generalizability, and efficacy.13 Based on the work done by a number of medicinal chemists, chiefly among them Dr. Alexander Shulgin, a number of such derivative compounds have already been synthesized with some preliminary reports on their effects and pharmacological properties available.14,15 The lesser known compounds have relatively few controlled subjective reports and require further study while having some potentially intriguing properties.

All such compounds are variations of the indole-related tryptamine class, a parent structure shown in Figure A with substitution groups marked with R values. Serotonin (5-HT), one of the most ubiquitous neurotransmitters, is a tryptamine derivative, while certain dimethylated variants (such as DMT) are endogenous to humans and can be found in blood and cerebrospinal fluid.16

Variation in the hallucinogenic effects of each compound is a function of many variables including dosage, body weight, method of consumption, lipophilicity of the drug, structural polarity, and differential agonism against neural receptors, most notably the 5-HT class. Certain patterns of structure-based drug activity can be understood from research and reports conducted over the past several decades.17 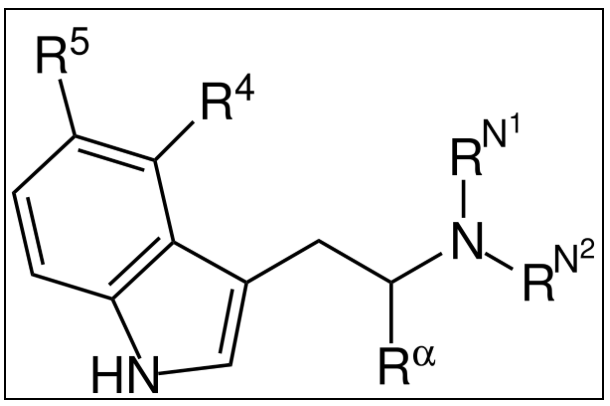 Figure A: The molecular structure of tryptamine

Activity in the primary tryptamine is highly dependent on substitutions at the R4 and R5 indole benzene positions and the RN1, RN2 and R-alpha positions on the amino-terminated chain. By contrast, preliminary work by Shulgin and others has found that substitutions at other positions on the indole structure produce primarily inhibitory effects with decreased potency and activity. Additionally, increasingly long alkylation at the RN1 and RN2 positions produces noticeably diminishing activity.

Understanding the functional differences in binding and activity between various substituted tryptamines will be an essential area of research to better understand their mechanism of action in the brain and improve safety.

Beyond simply the discovery of safer psychedelic compounds, future therapies will need to be adjusted to the needs of each patient. A single negative experience with a psychedelic drug, even in the clinical setting, could lead to aversion to future treatment. To avoid such an outcome, treatments must protect against the psychological dangers inherent in hallucinogenic drugs. Development of such treatments will require careful considerations of drug structure, activity, dosage, setting-of-treatment, time course, and other related factors.

One of the many challenges in elucidating the mechanism of action of psychedelic tryptamines in the brain is the complex interrelationship between the compound, its dosage, characteristics, personality of the subject, and exterior factors such as the setting in which it is consumed.18 A decade or so after the discovery of LSD, the presence of serotonin was detected in the mammalian brain. In the late 1960s, it was hypothesized that hallucinogenic compounds may have direct agonism at the 5-HT receptors, specifically discriminating from other non-hallucinogenic compounds at the 5-HT2A receptor.19 This evidence was further strengthened by a study showing controlled inhibition of the hallucinogenic effects of psilocin by pairing it with a 5-HT2A antagonist and demonstrating functional selectivity at the 5-HT2A receptor.20

Additionally, further studies have revealed that hallucinogenic tryptamines enhance glutamatergic transmission in the cerebral cortex at both a functional neuronal level and in the context of behavioral tasks.21 It was first reported twenty years ago that 5-HT induced a rapid increase of spontaneous glutamatergic excitatory postsynaptic potentials (EPSPs)/excitatory postsynaptic currents (EPSCs) in cortical pyramidal cells of visual cortex layer V, with the most pronounced effect in areas having above normal 5-HT2A expression.22 While several theories have been proposed to explain the increase in cortical glutamate, none has thus far been definitively conclusive. Though most work on frontal cortex neurotransmitters has focused on glutamate, 5-HT2A activation was also found to increase extracellular GABA, thereby producing both excitation and a feed-forward inhibition of cortical pyramidal cells.23

Much of the initial work on such neuronal effects was performed using single cell recordings from brain slices which are often not representative of an intact and functional cortex. More recently, ultra-high field multimodal brain imaging has revealed that psilocybin induced region dependent alterations in glutamate in the prefrontal cortex and the hippocampus. Moreover, regional alteration in glutamate was predictive of both positive and negative valence in the hallucinogenic effect based on subject feedback.24

Further research on rhythmic patterns of activity originating in cortical and subcortical areas has revealed certain interesting clues. Combining opto- and pharmacogenetic manipulations with electrophysiological recordings, it was discovered that 5-HT inhibits slow oscillations within the entorhinal cortex via the activation of Som interneurons via the 5-HT2A receptor. Intravenously administered DMT reduced oscillatory power in the alpha and beta bands and robustly increased spontaneous signal diversity. Furthermore, peak effects induced the emergence of theta and delta oscillations. One possible proposed explanation involves the switching from exterior information processing to interior endogenous perception, linked to phenomena such as REM sleep.25

While a definitive mechanism of action of hallucinogens is still not apparent, existing work has elucidated some of the functional pathways on a cellular, systemic, and behavioral level. Further research into fundamental neuroscience will be required to fully uncover the picture. Figure B shows a table of known receptor Ki values (in µM) for a set of hallucinogenic tryptamines.

Figure B: A table of receptor Ki values (all values are in µM) for tryptamine variants with hallucinogenic properties

Considerations for safety in the clinical use of tryptamines

The future prospects of tryptamines, both of synthetic or naturally-occuring origin will be dependent in large part on physical and psychological safety in the course of treatment. In early psychedelic research, two treatment approaches were explored: one focused on administering low doses of a hallucinogenic or empathogenic compound in the course of multiple sessions of psychoanalytic therapy; the other uses higher doses of psychedelic agents in the course of one or a few sessions to achieve a “peak” experience. While many contemporary studies showing high efficacy have utilized the latter paradigm, many experts have expressed the need for caution to mitigate the risk of negative experiences or “bad trips.” Hallucinogens known to induce “peak” experiences such as DMT, 5-MeO-DMT, and psilocin also have a documented history of negative psychological and physical side effects. Several paths for the reduction of risk could include:

–> Ensuring a comfortable and safe setting for patient infusions is kept to minimize possible stress throughout the treatment.

–> Pairing multiple compounds to reduce anxiety throughout the infusion and mitigate side effects such as nausea.

–> The development of novel tryptamine compounds which result in fewer negative valence responses.

In particular, pairing empathogens normally associated with increased valence with hallucinogenic compounds could have possible beneficial effects in the form of reduced anxiety and fear responses during treatment. Further research will be necessary to determine the efficacy and possible dangers of such approaches, notably cardiac and cross-interactivity risks.

The present review is an attempt to accomplish a few things. Firstly, it is to give a very succinct background on our existing knowledge of tryptamine activity in the brain. Secondly, it is to talk about some hurdles in the clinical use of psychedelic substances, namely physical and psychological safety and to suggest a few possible paths forward including drug discovery and combinatorial approaches. Not discussed within the review but of great importance is also the difficulty of evaluating novel tryptamines with complex visual and auditory components not usually suitable for animal models. The revolutionary potential of empathogenic and hallucinogenic substances depends not only in their effectiveness as agents but also on ensuring the safety of a broad clinical pool.

In the course of a burgeoning interest in psychedelic medicine, one comes across two broad categories of similarly interested characters. You will find that some are neurotically obsessed with rigor and refuse to even discuss what these... Continue →