Isoquinolines are a rather large naturally-occurring family of benzopyridines which find medical applications in everything from antihypertensives to anti-retrovirals to anesthetics. But they have an interesting hidden side which is to date pretty unexplored.

Those familiar with Alex Shulgin’s work will no doubt remember making their way through PIHKAL, first through the autobiographical chapters and then the synthesis portion where phenethylamines (a family which includes 2C-B, 2C-C, MDMA, and mescaline) are described in impressive detail. Some have also picked up TIHKAL, the continuation of the journey through the space of hallucinogenic compounds, this time covering tryptamines (psilocin, bufotenine, DMT, and LSD) with the same basic book structure.

Not including the various compiled studies and reports that Shulgin wrote over the course of his career, there is a third major book with the unassuming title The Simple Plant Isoquinolines. More ominously, in the introduction, Shulgin calls this The Third Book. The first obvious question involves the nature of the substances involved, namely isoquinolines. Most well-known hallucinogenic compounds, whether psilocin, mescaline, DMT, or LSD, belong to one of two classes of compounds: the phenethylamines and the tryptamines. Tryptamines are partially structurally analogous to the neurotransmitter serotonin while phenethylamines resemble dopamine and norepenephrine. A visual example of this is shown below. Notice the similarities in the chemical structures of the vertical columns: 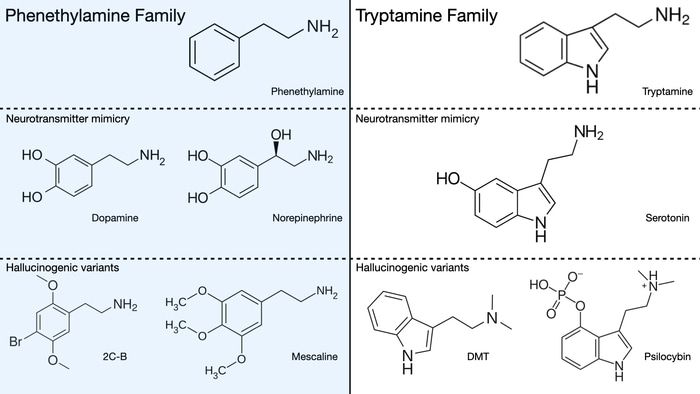 But wait! LSD, PRO-LAD, and AL-LAD which are in a technically separate family called the lysergamides look quite different by comparison at first glance due to the several bulky aromatic groups.

Looking closer however, we see the familiar tryptamine structure popping out at us and even a phenethylamine hiding in plain sight, just invisible due to its incorporation into the aromatic groups. 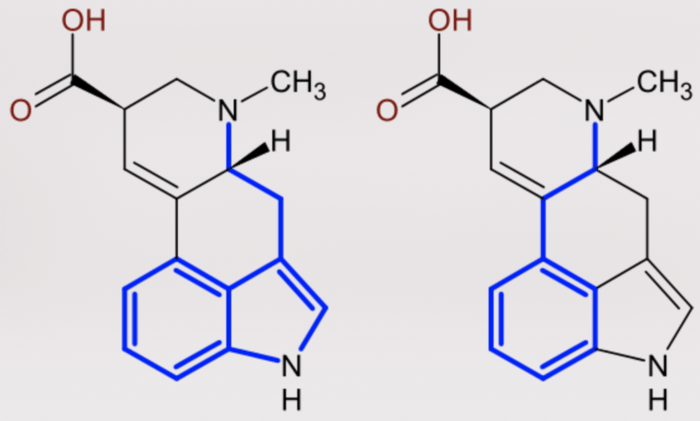 Coming back around to isoquinolines and their structure, we need to imagine folding the amino terminated alkyl chain on one of the tryptamine indoles or the phenethylamine benzenes, thereby forming a new ring.

The tryptamine variant is known as tetrahydrobetacarboline whereas the phenethylamine variant is a tetrahydroisoquinoline. Those familiar with TIHKAL will notice that the carboline-like molecule looks somewhat familiar and they would be entirely right. Harmaline and Harmine, both monoamine oxidase inhibitors which Shulgin describes, are derivatives of this basic structure. Ibogaine has some similar visual characteristics but has a cycloheptane ring straddling the indole versus a cyclohexane. 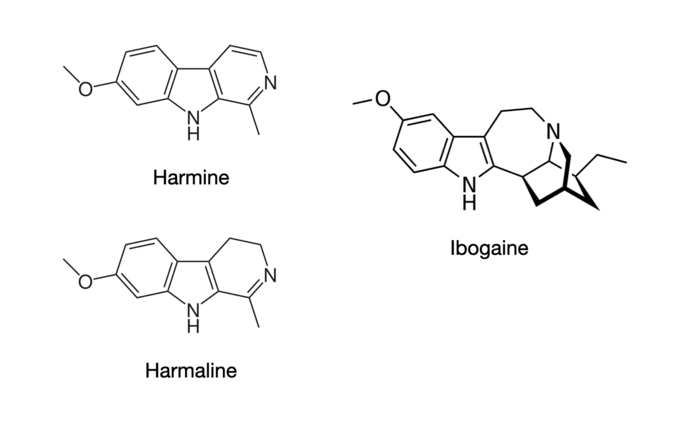 All three of the compounds are known to have hallucinogenic effects according to TIHKAL, though differing somewhat from the ‘traditional’ psychedelics. Harmaline is known to produce closed and open eye visual distortions in the 200+ milligram dosage range with a rather high body load and effects resembling paranoia.1 The seeds of the Peganum harmala plant tend to produce a psychoactive effect as well at the gram scale, though these contain a number of other alkaloid species including harmine. More importantly, due to the monoamine oxidase inhibitory effects of Harmine-like betacarbolines, they have been consumed to make tryptamines such as DMT orally active.2 While we may not think of MAOIs as having central activity, subjective reports seem to suggest otherwise. They unfortunately also tend to have a less-than-favorable profile which includes nausea, hypotension, blurred vision, paresthesia, and general discomfort. 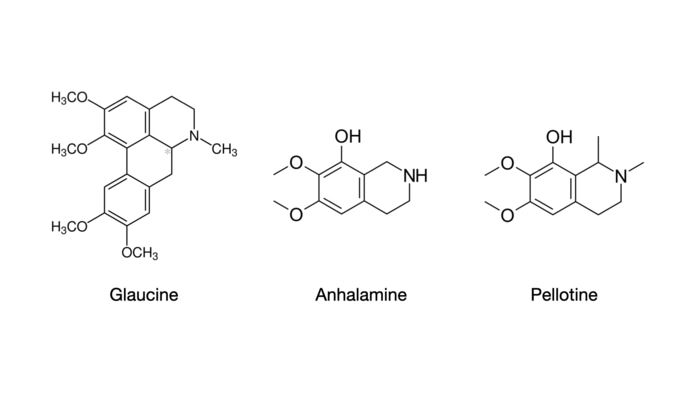 Another known hallucinogenic substance of the isoquinoline class is glaucine, found in a number of different plant species in the family Papaveraceae. Glaucine is an anti-inflammatory bronchodilator, which acts as a calcium channel blocker.3 The naturally occurring (S)-isomer also has activity at the important 5-HT2A receptor.4 While it is a relatively unknown hallucinogenic compound, some clinical reports have indicated that it has broadly dissociative effects as well as open and closed eye visuals.5

The other two molecules shown above are both isoquinoline alkaloids of the Lophophora Williamsii cactus, also known as peyote.6 While the phenethylamine mescaline is generally considered to be the primary active hallucinogen, the complex set of auditory, visual, and tactile features that make up the subjective effects of peyote may be attributed to activity of these compounds, whether alone or in combination.7

Coming back to The Simple Plant Isoquinolines, it’s notable that the vast majority of Shulgin’s third book is devoted to characterizing various isoquinolines and their origin plant species. Notably unlike PIHKAL or TIHKAL, there are no reports of effects in humans and many of the indexed compounds have never been synthesized. While it is likely that many of these plant alkaloids have no significant activity at 5-HT2A, nor hallucinogenic effects, nor anti-depressive properties, they remain a fascinating direction of research for a few reasons.

Firstly, as described above, there are a number of isoquinoline compounds which have demonstrably shown CNS activity and have noted hallucinogenic properties. Secondly, the index of isoquinolines with possible CNS effects is vast and largely unexplored, making it a ripe direction for investigation.

Perhaps with the growing interest in psychedelics research currently ongoing and a number of clinical trials in the works, the mysterious field of isoquinolines will finally be elucidated.

Some exciting research came out of Emory University a few years ago, though it was not widely reported at the time. Leonard Howell (who has since retired) and his group discovered that while racemic MDMA (a mixture of the R(-) and S(+)... Continue →