Some exciting research came out of Emory University a few years ago, though it was not widely reported at the time. Leonard Howell (who has since retired) and his group discovered that while racemic MDMA (a mixture of the R(-) and S(+) enantiomers) produced neurotoxic effects in mice, administering just the R(-)-enantiomer did no such thing.1,2

To give some background, the neurotoxicity of MDMA has been suspected for quite some time, going back a few decades. While the mechanism has not been fully uncovered, MDMA appears to produce damage to the serotonergic axon terminals in the striatum, hippocampus, and prefrontal cortex.3 As a result, we seem to find lower expression levels of tryptophan hydroxylase (the rate limiting enzyme involved in serotonin synthesis) and 5HT (serotonin itself) in rodents after a series of heavy doses of MDMA, as well as lower levels of DAT and SERT expression, which are dopamine and serotonin transporters respectively.4 Furthermore, some studies have shown MDMA associated apoptosis (cell death) in cortical neurons.5

While this is certainly troubling, there are a few caveats to consider. Firstly, most of the work done has been in lab rodents and primary neuron culture which to put it mildly, does not always translate to humans. Secondly, the claims about MDMA neurotoxicity seem to be the most reliable at very high concentrations and incidences-of-use. A 2015 systemic review6 found “no convincing evidence that moderate MDMA use is associated with structural or functional brain alterations in neuroimaging measures.” Thirdly, there are questions about the differential neurotoxicity of MDMA versus its metabolites. Research has shown that the MDA metabolite, produced by hepatic N-dealkylation, may be the cause of some of the neurotoxic effects seen with MDMA systemic administration.7 Nevertheless, concerns over the safety profile remain.

This brings us back to the Emory University research from a few years ago. The work, led by Daniel Curry and Matthew Young, compared administration of standard S(+)R(-)- racemic MDMA to the R(-)-MDMA enantiomer in rodents. While the R-MDMA seemed to act similarly to the racemic variant in promoting social behavior and reducing fear responses, it didn’t produce signs of neurotoxicity, increase locomotor activity, or cause hyperthermia. More impressively, this result held with repeat high doses. The claims about neurotoxicity came in a few different flavors. Firstly, there were no signs of reactive astrogliosis, which is a marker of CNS damage. This was confirmed with a GFAP immunoassay. 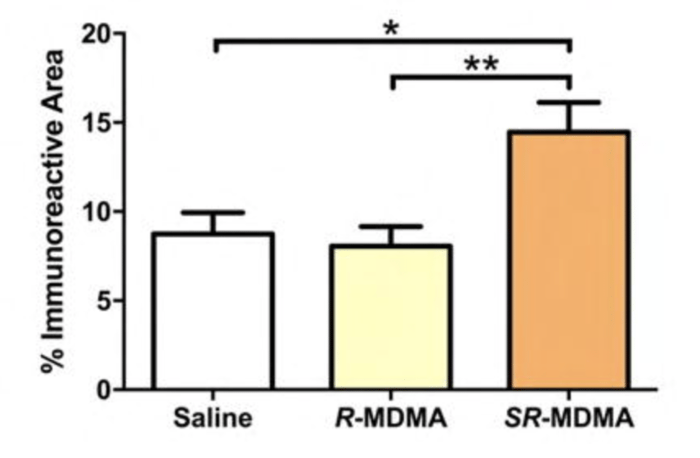 Secondly, there were fewer changes to serotonin, dopamine, and DAT levels across brain regions with the enantiomeric form of MDMA versus the racemic.

Of course, there are still questions relating to drug tolerance and other adverse effects outside of the brain. But the Emory group’s research is a major step forward in reducing the risk profile of MDMA, as it moves into clinical use. It remains to be seen whether neurotoxicity becomes a concern with the relatively infrequent infusions budgeted for PTSD, currently the main target for MDMA as a clinical tool. Nevertheless, a safe version of MDMA would have significant benefits in place of a chronically administered worse alternative and is highly exciting for that reason.

The biggest next step for this research is getting human clinical data for R(-)-MDMA to hopefully show that it has comparable prosocial properties to the racemic variant. Surprisingly, nothing has emerged so far on this front although increasing interest in MDMA due to MAPS may change this.

In the course of a burgeoning interest in psychedelic medicine, one comes across two broad categories of similarly interested characters. You will find that some are neurotically obsessed with rigor and refuse to even discuss what these... Continue →